This site contains a record of the plants and animals we have observed on our property in West Gippsland.  The birds you notice first at our house are Bell Minors and Blue Wrens.
Seen and heard a few birds lately that I can't seem to photograph!  Saw a Crested Shrike tit outside the study window.  I see and hear Gang Gangs fairly often and also saw and heard what I'm pretty sure it was an Australian Hobby Falcon.  ​We saw a painted button-quail (or something like it) a few times (early Jan 2016 & late 2017) but just can't manage to get a photo!  I've started a calendar here.  Also, Cardinia Shire has some plants here. 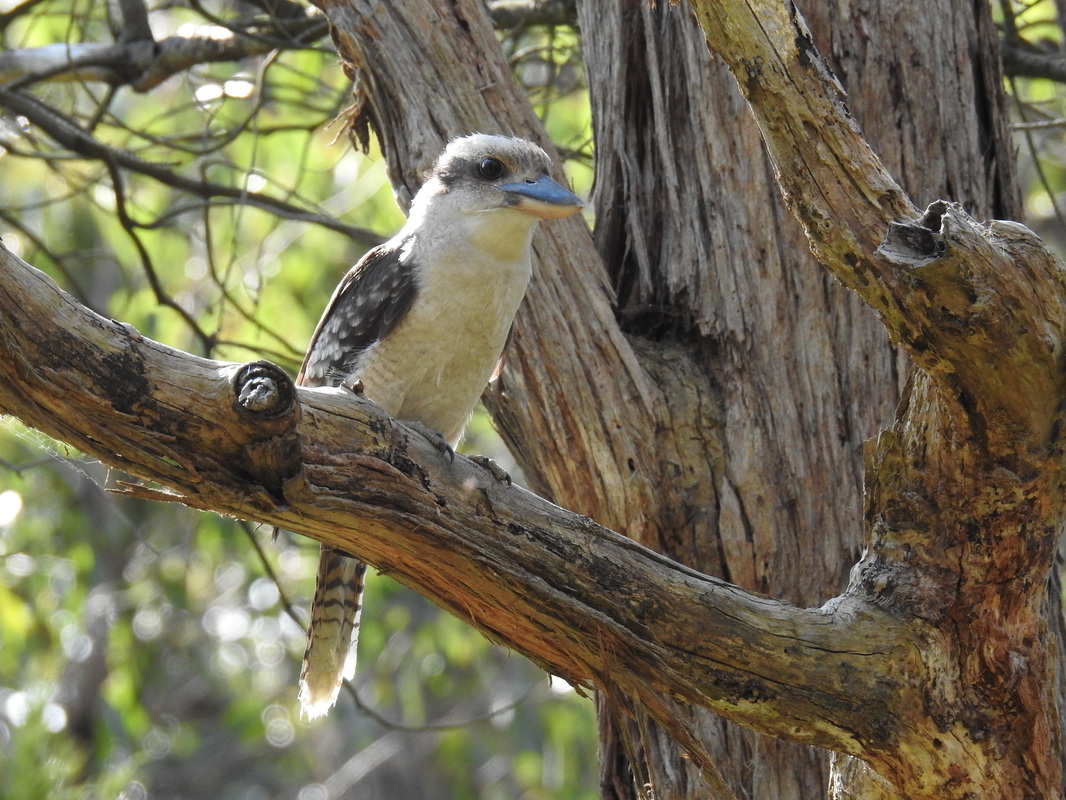 Eastern Rosella - easy to see at our old place, but always so high in the trees here that they are hard to photograph 2/11/15
A Crimson Rosella, who has been avoiding my camera for some time now, kindly stopped on the tree outside the study window! 30/3/16
King parrots - they love the Cherry Ballart! 17/10/15

Yellow-tailed Black Cockatoo 26/1/16
You can hear the noisy Sulphur Crested Cockatoos settling down high in the trees near the bungalow in the evenings 12/1/16
Saw some Galahs on the fence line with the neighbours.  First time I've seen them here - perhaps because they are always so high up in the trees?  11/6/16 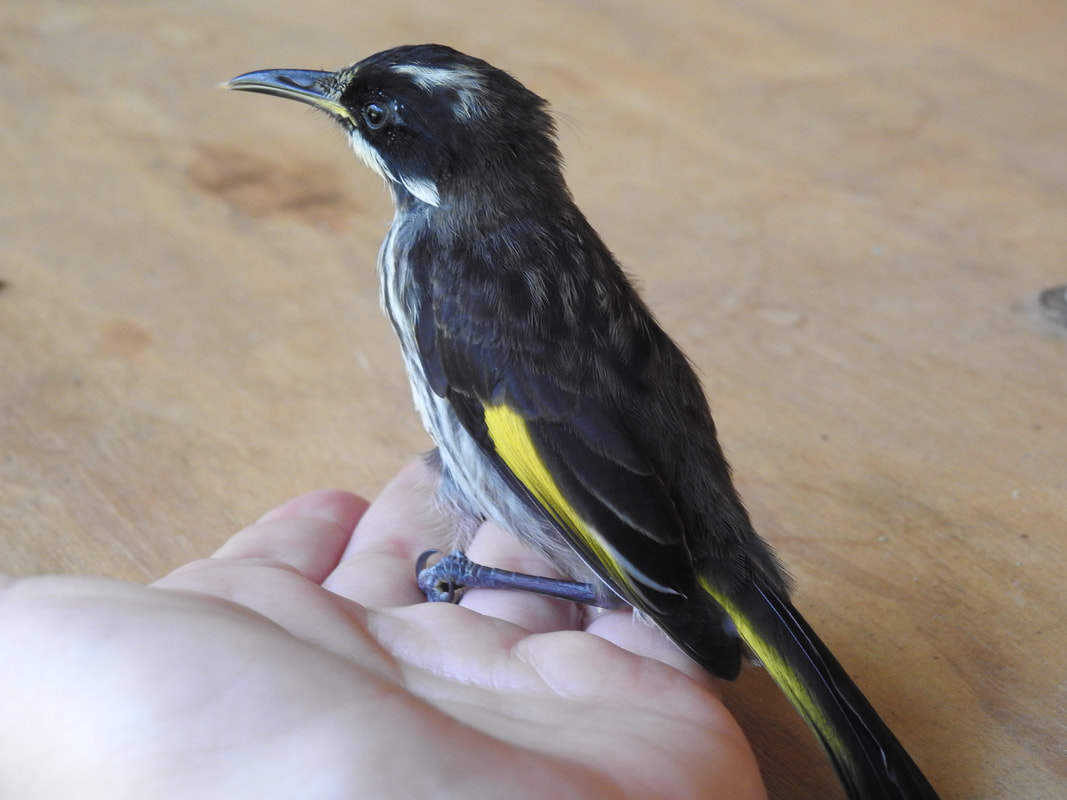 17/10/15 Eastern Spinebill - these tiny guys are often outside the kitchen window.  They love the red flowers of the pineapple sage.  They are also on our new $5 note along with Prickly Moses - although I've never seen them sit in one!
Bell Miner (Bellbird) - that's what you can here going "ping" near the shed.
A native, but muscles in on other birds' food and territory.  6/10/15
Red Wattlebird  2/11/15
Little Wattlebirds, which are quite noisy and make the other birds scatter, have started appearing. 4/5/16

21/11/21 Eastern Whipbird  We occasionally hear the whip crack, but not often.  This year a female has been hopping around the house.  Didn't get fantastic pictures, but I'll keep trying!

15/12/16 Finally got a photo of a silvereye - a dead one I found near the car today :( I think it is comwalli because it has a yellow throat.  I have seen others, but I've been unable to get photos! 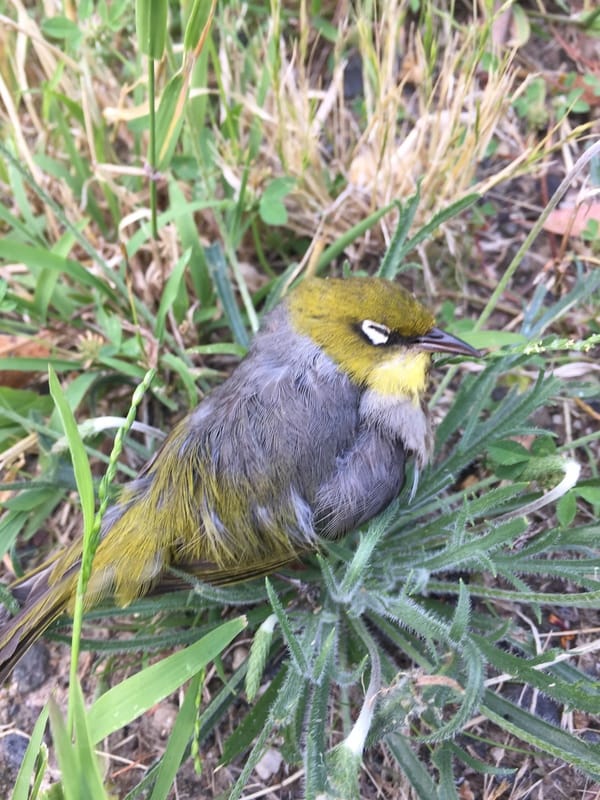 2/11/16 - Satin Bowerbird - female. Very excited about this one!  Amazing blue eyes- I wonder where the Bower is? 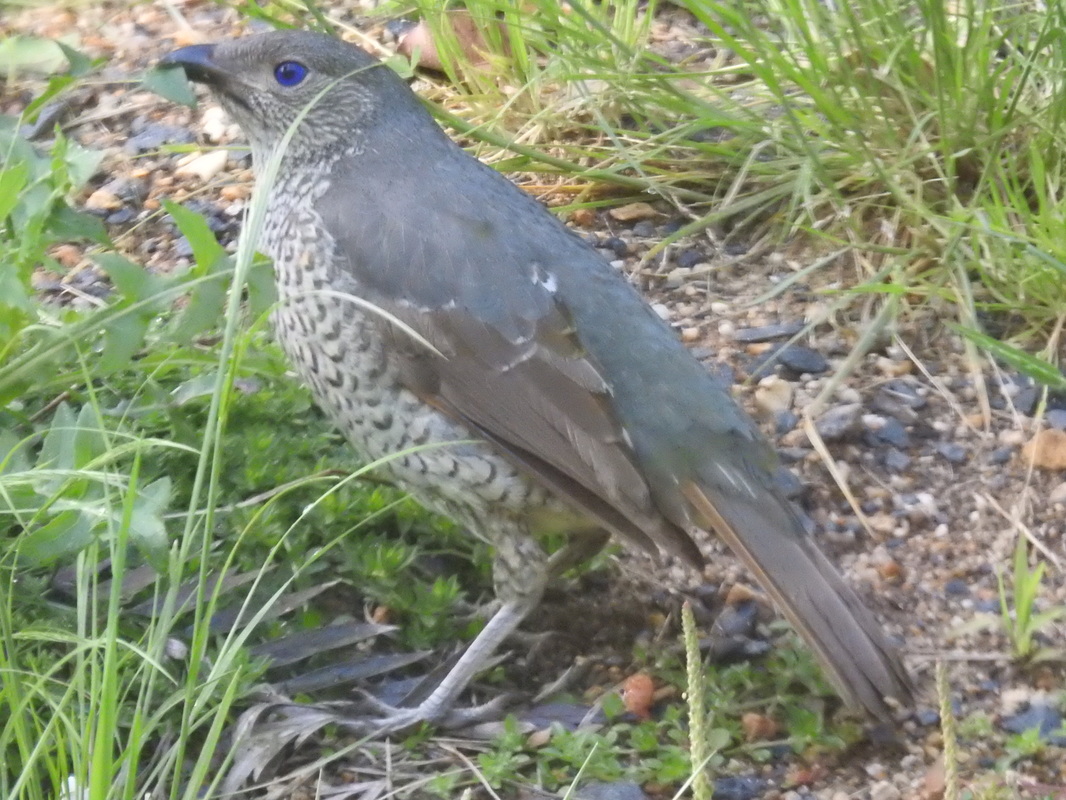 Spent an hour sitting under some fruiting mistletoe today hoping to see a Mistletoe bird - and I did!  At least one male and one female - but do you think I could get a photo?  The male has a lovely red colour.   This was my best shot - a female :)  and here are some pretty mistletoe berries.  10/4/16  And I believe this is a Mistletoe bird nest - about 1.5m off the ground in the teatrees. 11/6/16 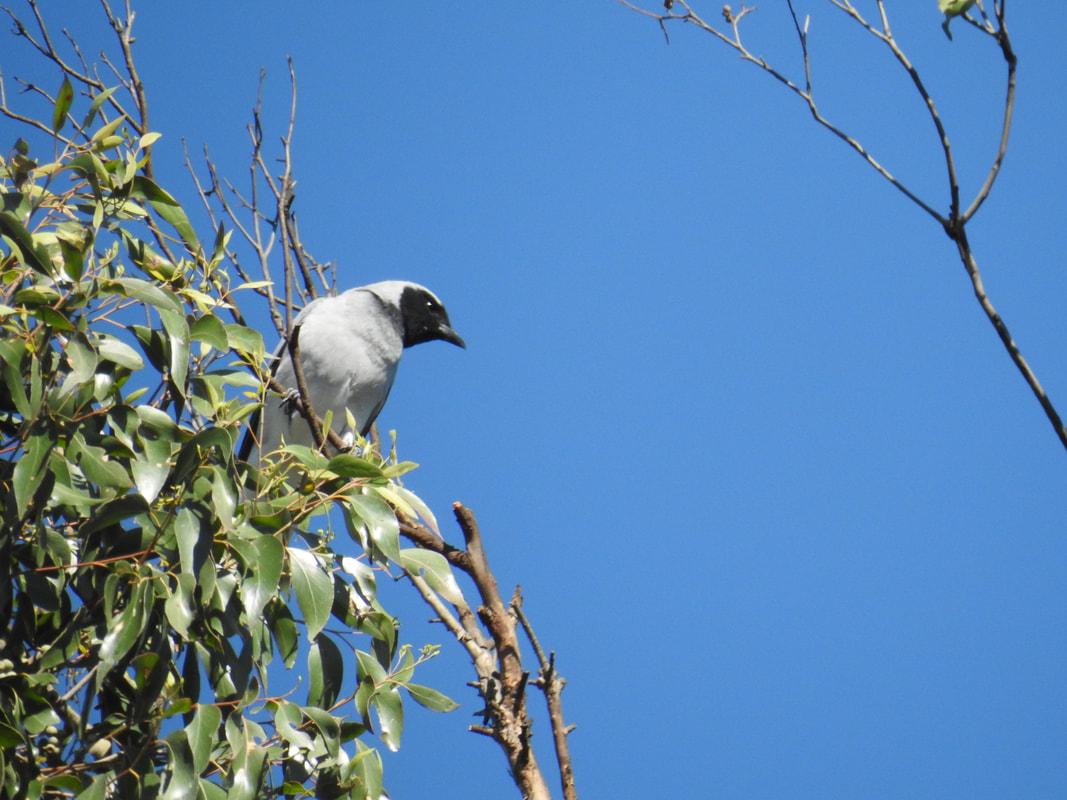 A young Horsfield's Bronze-cuckoo  Has a bit of colour on its tail and you can see the markings on the underside of the wing and tail. 25/12/2015

Brown Goshawk.  The browner one is a juvenile. 21/12/2015
Wedgetail flying overhead, it comes over reasonably often to hunt.  It probably lives in the Bunyip State Park. 10/7/18 a juvenile landed at our house!! Unfortunately couldn't get a good shot - looks more like a sick cockie! 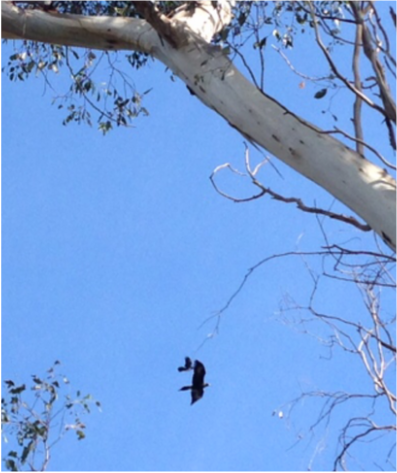 Golden Whistler - juvenile female? 3/2/16   I have since seen adult golden whistlers on the other side of the easement - a male and female together (they look quite different), but no photos as yet!
Olive Whistler. 4/5/16
Grey Shrike Thrush - always looks so curious! 15/2/16

A White-faced Heron (Egretta novaehollandiae) feeding her babies above the big shed.  I guess she's giving them mushed up yabbies from the dam?  Or some juicy frogs?

A White-throated Treecreeper (Climacteris Leucophaea)  that stunned itself by flying into Josh's window.  25/9/15

Dusky woodswallow - catching bugs around the tea trees lining the easement.
​They look like they have a white stripe across the bottom of their tails when they fly. 3/10/15
25/4/18 Grey Butcherbird
Australian Magpie - we used to have loads at our old place, not so common here 9/3/16
Pied Currawong - appeared around Easter and conducted mass flyovers and general hassling of the bellbirds, took up residence on the other side of the house for about a month, and then disappeared 25/3/16

5/03/18 Rufous Fantail  So excited to see this bird! Couldn't manage to photograph the beautiful red fantail. They are much more common  further north and are migratory (head north in Winter).  This one was in love with Andy's shed and didn't leave for ages.
Grey fantails was not interested in showing their fan tails.
​There are lots of these around our place.  I think this is a fantail nest also. 3/10/15
Wiggly Willy Wagtail 16/3/16

Eastern Yellow Robin 6/10/15
And nest decorated with spiderwebs, bark, lichen and moss - so pretty!  1/11/16
Unfortunately the poor little chicks got eaten by something :(

Red-Browed Finch.  These guys have lovely red tails but they move so quickly I can't seem to get a good photo! 6/10/15

11/4/17 A Southern Boobook Owl.  Andy saw this owl in the daytime just sitting on a low branch checking out the world. He took a number of photos with his iPhone, but unfortunately could not get a good shot.
​ 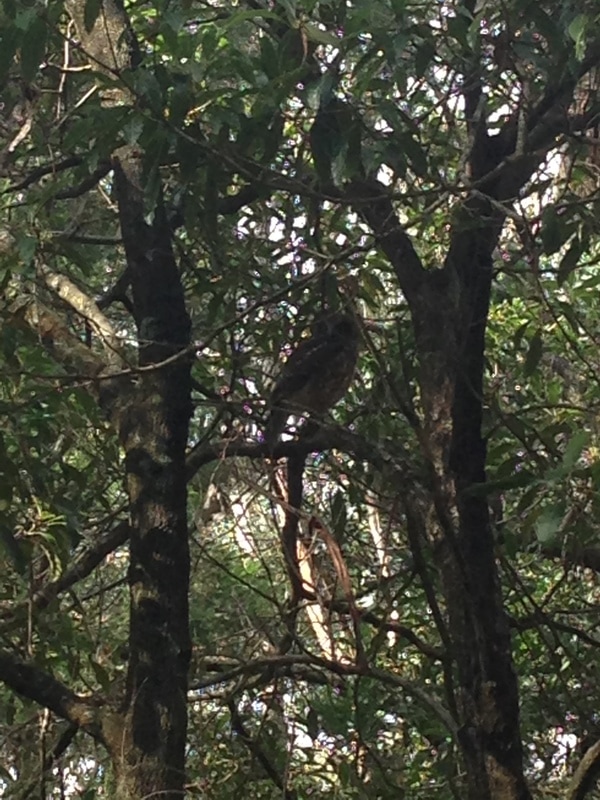 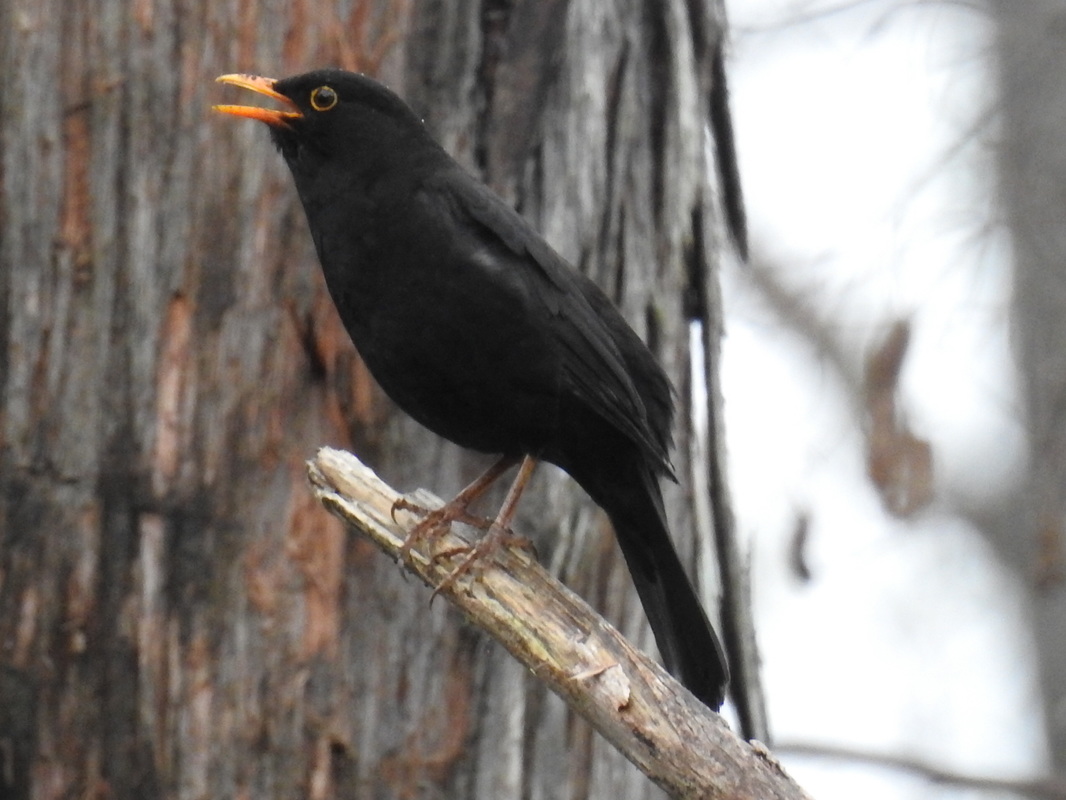 Indian Mynah - I've only seen them on the fence lines with the neighbouring farms.  Not a native.  16/1/16 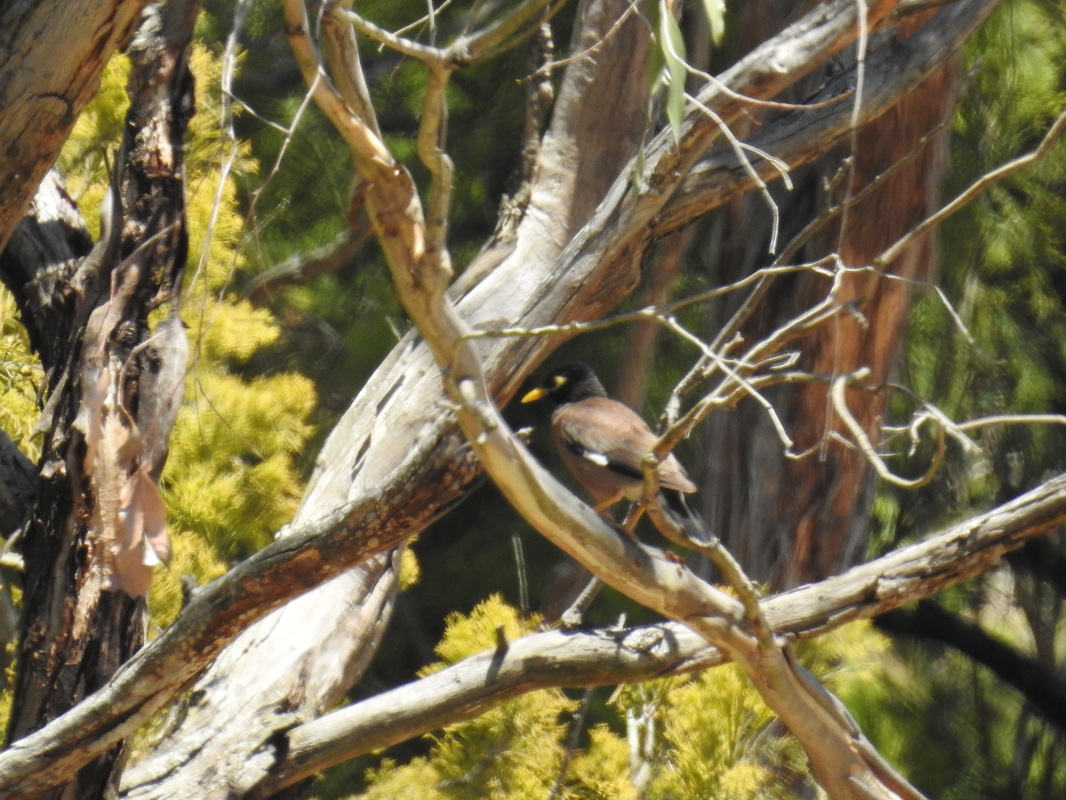 This was the third time I've seen a pelican fly over. 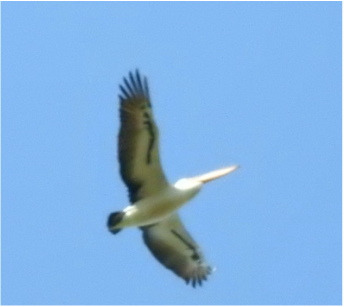 Some interesting nests.  Wonder who they belonged to?