Apparently there are Southern Brown Bandicoots and Southern toadlets around
​- although we haven't seen them.
31/5/2017 Swamp Rat (Rattus lutreolus) Lots of these fat little cuties running around.
4/2/17 From Museum Victoria:   I can see the animals are certainly Antechinus of some sort due to the sharp insectivorous teeth, conical snout and haired, tapering tail; likely to be a Agile Antechinus Antechinus agilis, based on their relative abundance at the locality of the specimen. Although superficially rodent like in size and colour, Antechinus are unrelated to rats and mice; instead they are insectivorous marsupials more closely related to quolls and the Tasmanian Devil. Antechinus are renowned for their semelparity; a reproductive strategy that sees all adult males die off after a single, frenzied episode of mating, usually in the depths of winter every year, leaving a predominantly female adult population until the offspring reach maturity. 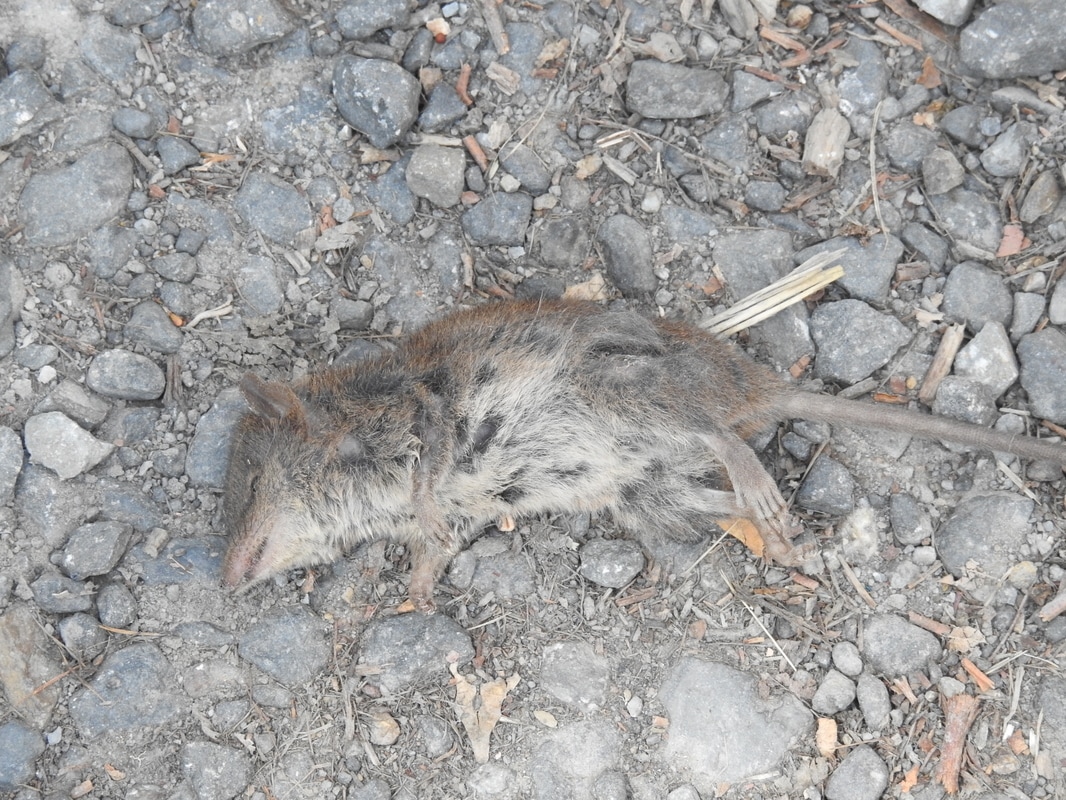 We've seen some cute little bats flying around - but MAN are they hard to take a photo of! Here is a dead one I found.  Museum Victoria identified it as a Common Bentwing Bat (Miniopterus schreibersiss). It's a widespread species found across the globe, with many regional sub-species, some of which are endangered. Unfortunately I didn't keep it, so I couldn't send it to them for further identification.  If I see another one.......maybe! 1/4/16
9/21  Another cute little bat.  This one got stuck on a curly lightbulb and died :(  It looks like a Gould's long-eared bat (Nyctophilus gouldi).  Apparently the ears fold down when resting!
Snakes!  They are definitely around - lots of rats and frogs for them to eat :)  Tiger and brown snakes have been seen.  Andy found th (25/9/2015), apparently somewhere near a bend in the driveway was known to be a "black snake" nest by the former owner (Ben did run over a very dark snake near the bend which somehow managed to slither away!).  This snake skin I found on the easement was 1.25m long (12/11/16) It gave me a bit of a scare! The boys wouldn't let me keep it in the house :(
The bottom snake was with a larger one - possibly mum - who slithered away revealing a dark pink underbelly - possibly a red bellied black snake? (24/8/17) Apparently they grow to a metre, can have 12 offspring at a time and have live births rather than eggs.  Also highly venomous, of course!!  http://www.whatsnakeisthat.com.au/vic.html
19/01/18 This orangey frog is also a southern brown tree frog.  Either a Litoria ewingii or Litoria verreauxii according to Museums Victoria.  I'll have to listen out for the call for a positive identification!
21/11/21 Found this cutie under a log next to my frog pond (yay) 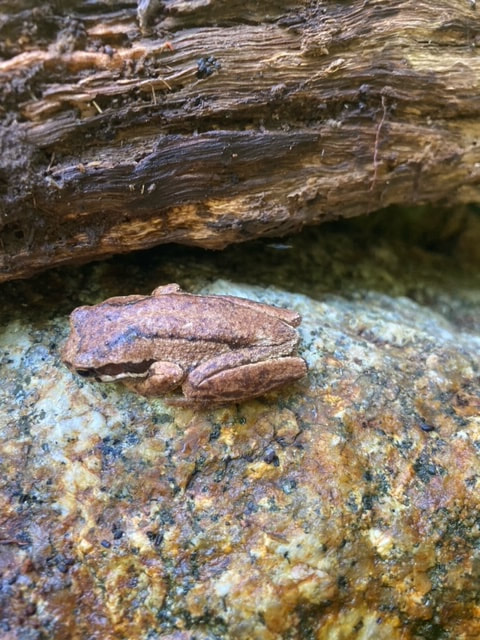 9/21  One of many tiny froggies down on the swamp part of our property.​ 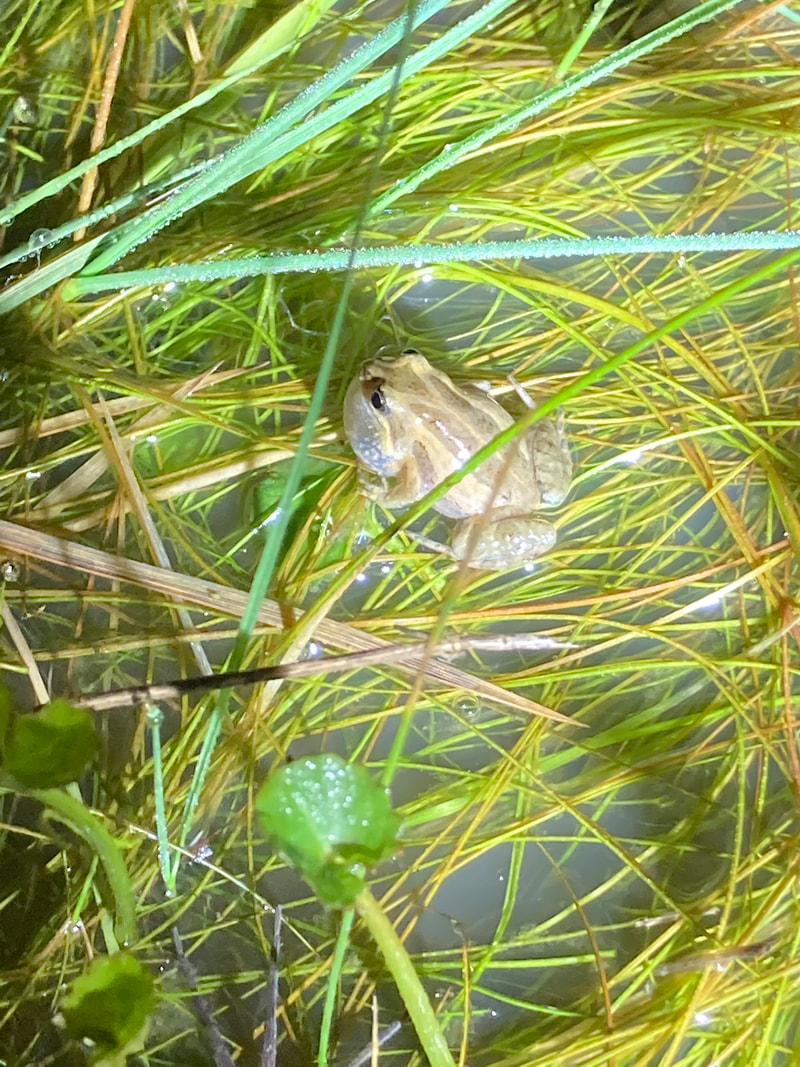 We regularly see between 10 and 20 Eastern Greys hopping around - but we cannot figure out where they sleep!  Some are pretty big!  Taller than me I think! October 2015
Wilbur the Swamp Wallaby turns up regularly outside the kitchen window 7/1/16
May 2018 - Wilbur brought an extra guest to breakfast today!
Thought this was a snake!  Just a sneaky blue tongue lizard. 3/10/15
Cute little echidna 10/10/15
Southern Grass Skink 18/10/15
Little skinks everywhere.  Check out the tail on this one! 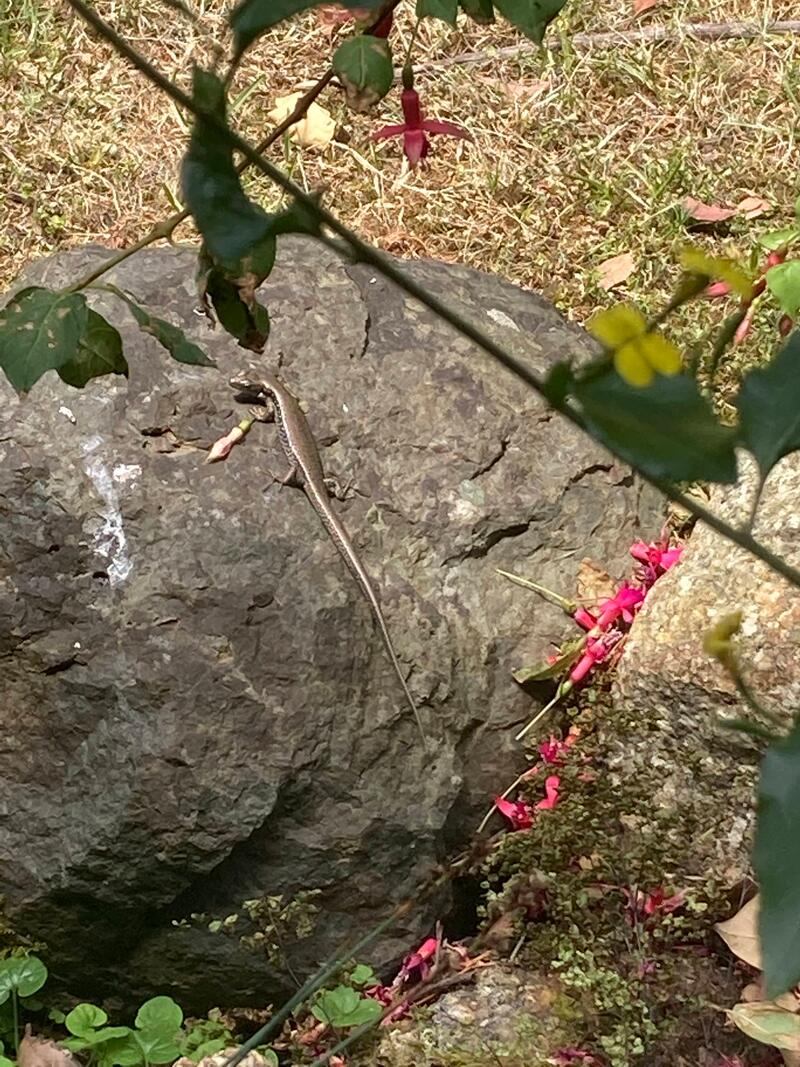 A cheeky brush tail possum with baby and a brush tail nest 24/9/16
And a sweet little ring tail possum - see how it uses its tail? 17/10/15.  We used to see it in the fig tree outside our bedroom window a lot.  Then, when cleaning out the gutters on the bungalow I discovered that there was one nesting in the corner of the gutter.  We didn't see any for a while after that, but we did find a drenched one hiding in Andy's Gore-text coat which was hanging up outside (he got a fright when he tried to put it on!) and then this one in the video ran up the tree outside the study today and gave us a lovely show 18/03/18.
9/21  We noticed this nest in a pittosporum we were about to cut down..  We weren't sure what type of nest it was or if it was still in use, so we gave the tree a gentle shake and a little ringtail climbed out!  Since then we've found a few more - unfortunately all in pittosporum! 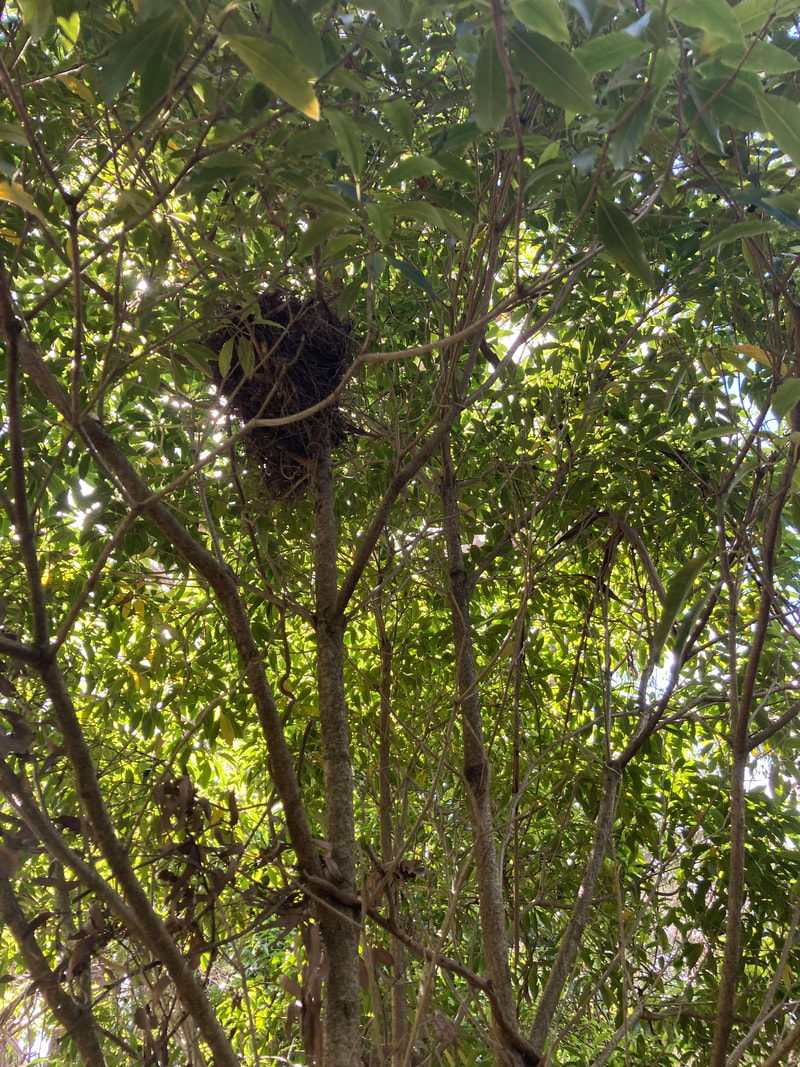 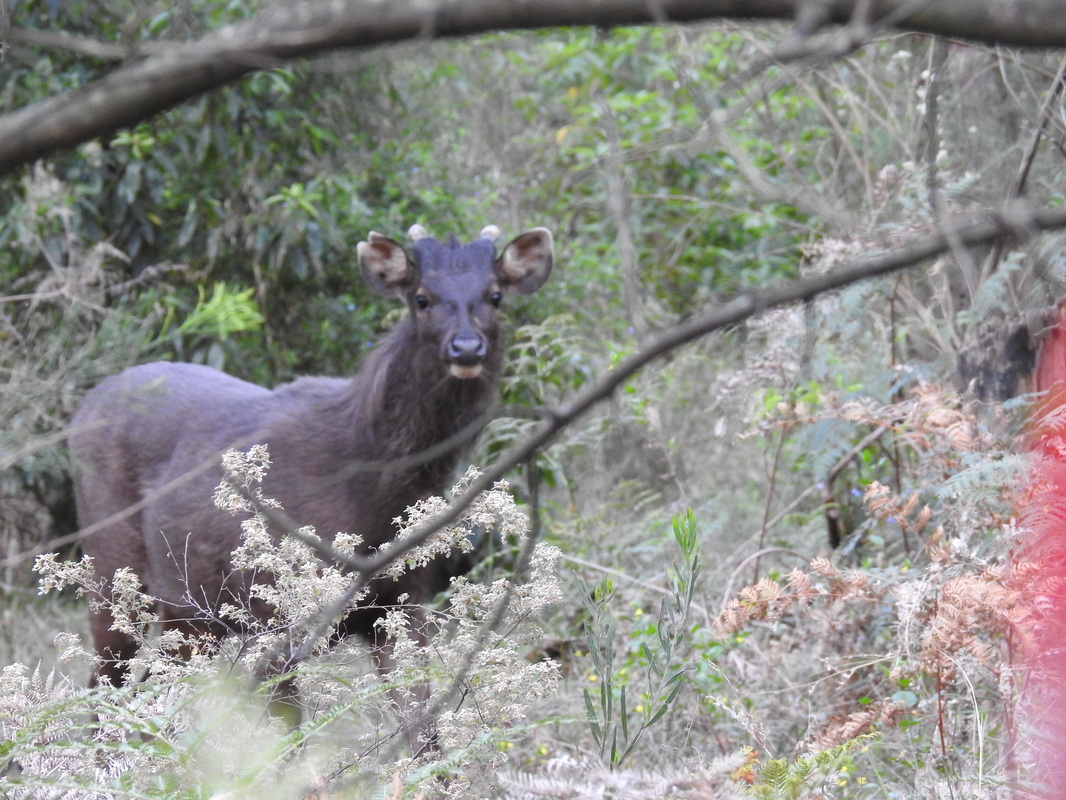 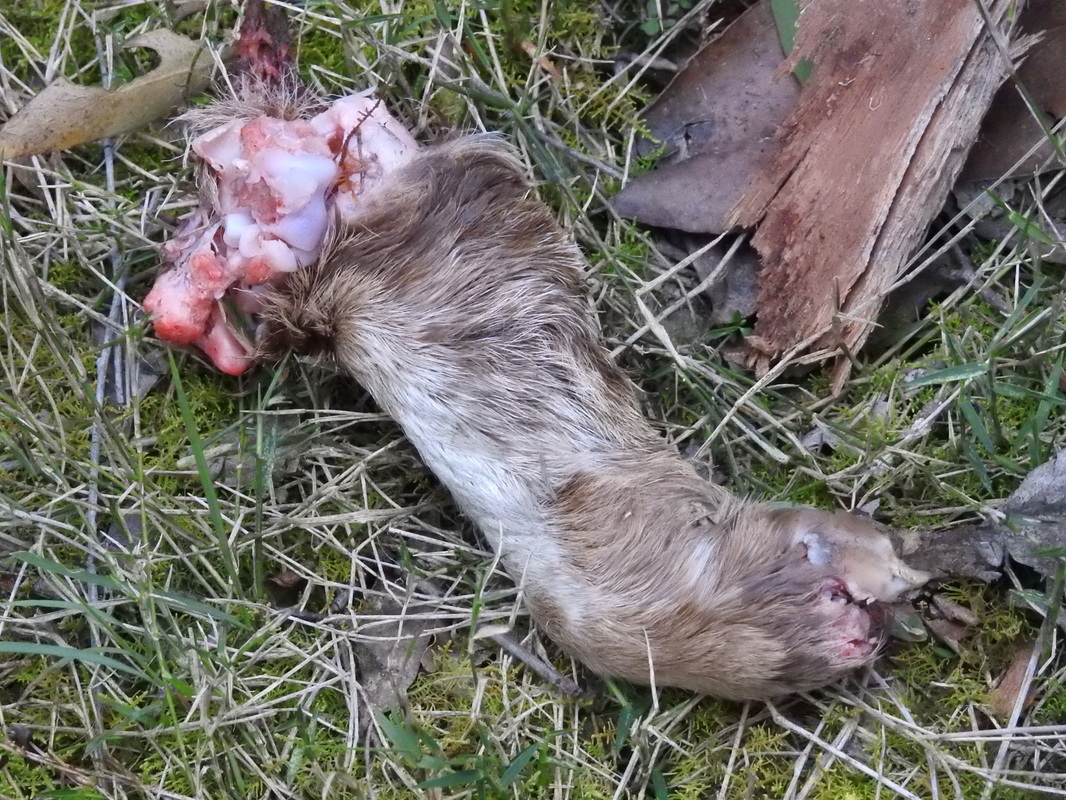